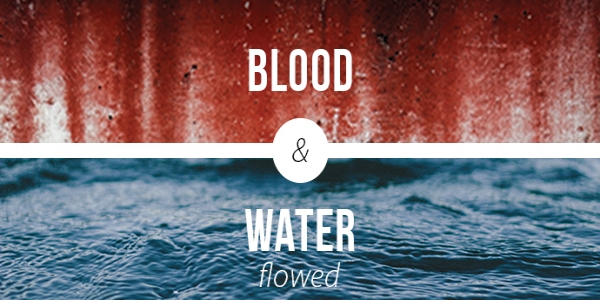 Although the Lord’s resurrection life was not broken, He Himself was broken that His divine life might be released. Here, water signifies life. This is portrayed in the Old Testament by the smitten rock out of which the living waters flowed to quench the thirst of the children of Israel (Exo. 17:6). The Lord is the rock who was smitten on the cross. He was broken so that His divine life could flow out of Him as living water. Not only did water come out of Him but also blood, the symbol of redemption. Before we can take the Lord as the living water of life, we must firstly be cleansed. Thus, blood is mentioned as the first item and water as the second. After we have been cleansed by the blood, then we are enabled to receive the Lord as life. These points cannot be found in the other three Gospels. They are only found in the Gospel of John, because it is a book which reveals that the Lord as life could only have been released by His death. While the record of the other three Gospels is mainly for redemption, the record in the Gospel of John is mainly for the release of life.